The elusive blue badge: What’s the deal with Twitter verification in 2020?

I think it’s fair to say that most people are familiar with Twitter’s coveted blue badge. The now infamous symbol of an officially verified account that lets people know that the account is authentic.

The badge appears next to the name on an account’s profile and next to the account name in search results. It gives credibility, it suggests an account is of public interest and, has become a bit of a status symbol in recent years.

The verification policy used by Twitter has alway been a bit of a mystery. In the past Twitter has said that they will verify an account if it is of public interest and/or if it is an account that is likely to lead to the creation of false accounts. However, they have never gone into detail about how they determine what they consider to be in the public interest.

The only thing that we know for certain about verification is that it is much sought after. After all, if you are lucky enough to have your account verified you are joining the ranks of Sony, The BBC, Barack Obama, Bill Gates, and of course ‘90s legend, Timmy Mallet.

For years Twitter allowed individuals and businesses alike to apply for verification and then… the good times came to an end. Twitter stopped accepting verification requests. 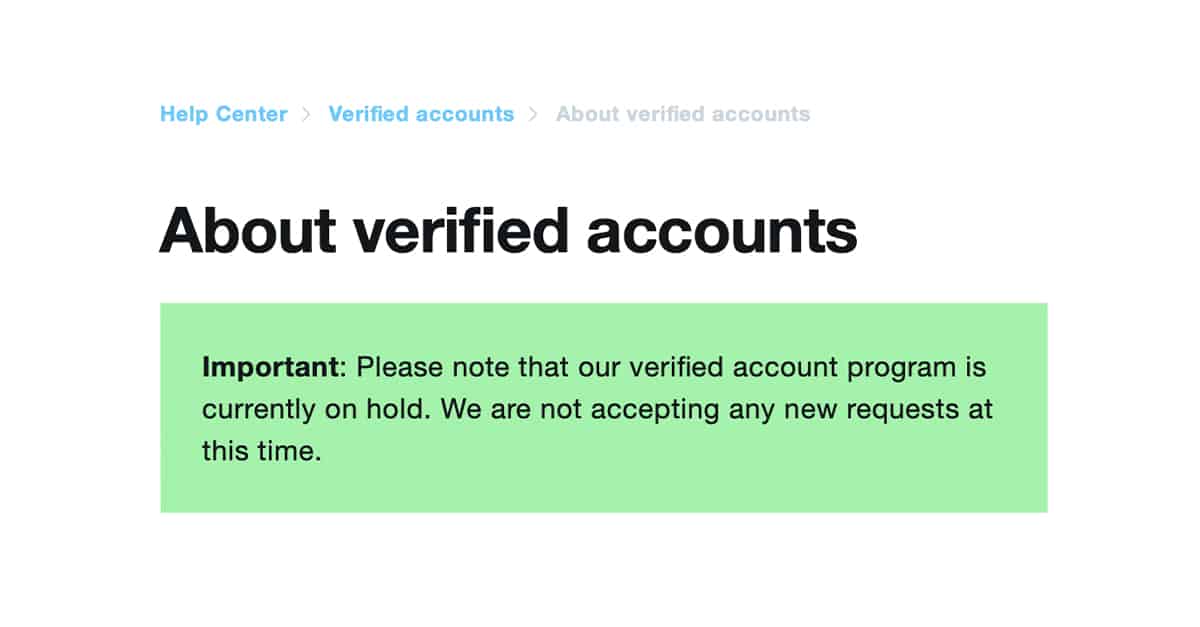 Anyone who has been trying to get their account verified on Twitter will be very familiar with the above notice. It’s been there for quite some time. Twitter put a hold on all verification requests indefinitely in 2017. But why?

The verification process was paused due to public outcry over Twitter’s decision to give a blue badge to an alleged white supremacist who tweeted disparaging comments about a woman killed during a riot in Charlottesville, Virginia.

Twitter was forced to recognise that regardless of their intention the blue badge was seen as an endorsement of the account.

Verification was meant to authenticate identity & voice but it is interpreted as an endorsement or an indicator of importance. We recognize that we have created this confusion and need to resolve it. We have paused all general verifications while we work and will report back soon

CEO, Jack Dorsey also sent out a tweet at the time, saying “we realized some time ago the system is broken and needs to be reconsidered. And we failed by not doing anything about it. Working now to fix faster.”

However, I don’t think anyone was prepared for how long it would take them to ‘fix’ the issue. But don’t despair, there is now hope on the horizon that verification will soon be making an epic comeback.

Reverse engineer, Jane Manchun Wong, is well-known for finding new features on Facebook and Twitter. On this occasion, she stumbled across a new “request verification” feature in the “personal information” section of settings and started digging deeper.

What she found was that Twitter is planning to completely overhaul the whole process and enhance the benefits for those who manage to attain verification. Not only will the blue badge be a status symbol and authentication tool, it will be a gateway to special privileges, such as priority in search results and enhanced reporting. Something that we marketeers will find extremely useful.

The new process will also offer some much needed transparency. In a recent interview with TechCrunch, Twitter confirmed that they will now publicly document what qualifies a Twitter user to be verified.

This will certainly help clear up any confusion about what being verified means and who will be eligible.

Sneak peek of the new Twitter verification in different stages: - Pending: Wait for the email - Success: Yay! Stick to the rules and be the same person - Rejected: You can only apply once every 30 days. If you broke the rules within the last 3 months, you’re ineligible pic.twitter.com/Inn5KRlF1K

Twitter also appears to be clamping down on bad behaviour on their platform by making it clear that verification can be taken away or not granted at all if their rules are breached.

In future, if Twitter finds an account to have breached its rules, the account won’t be eligible to re-apply for verification for 3 months. This is a pretty strong stance from Twitter who has previously come under heavy criticism for not enforcing its own rules and allowing hate speech on its platform.

KEEP YOUR EYES ON THE VERIFICATION PRIZE

So, there you have it. The future of Twitter’s verification programme.

Twitter haven’t released any launch dates yet, but it’s likely that they will roll it out slowly over time, so keep checking your account settings for that all important “request verification” tab. One day, it will appear like magic and you will want to act quickly when it does.