Conor McGregor? Who the F^&%$# is that guy? By now, of course, you already know the answer. McGregor has ascended the walls of the UFC octagon faster than his head kick against Donald ‘Cowboy’ Cerrone at UFC 246.

He’s an accepted part of the cultural fabricate. Yet he’s an agitator. Someone who rejects societal norms with punk-like attitude. It’s a badge of honour he’s historically wore with pride. Or he did.

Whether you’re a fan or not doesn’t matter. For many, McGregor’s antics outside the Octagon leave a lot to be desired. But, as a marketer, it’s hard not to be impressed. Particularly with how McGregor continues to adapt his brand. And rebuild it.

“It’s hard to be humble when you’re the best.”

Just take the Cerrone fight. Public sentiment appeared to be at an all-time low. The build up to the Khabib Nurmagomedov fight was more sinister than that movie, Sinister. Then there was the loss. And the post-fight furore. A world pressure of must-have bore down on his now 170 pound shoulders. Rather than riding into town with his typical brashness though, McGregor embrace a stoic respectability more akin to two gunslingers facing off at high noon.

The Irish Man skillfully adapted his brand ahead of his comeback – a more respectful and seemling sincere approach demonstrating a level of PR consciousness. It was an unexpected curveball. True to his past but bobbing and weaving into a new future. Conor McGregor’s meteoric rise deserves examination. It’s a petri dish crawling with insights which marketeers and PR experts can learn from.

McGregor walks the walk – or the billionaire strut – and talks the talk. It’s a uniquely dynamic combination. History suggests athletes are either great athletes or great talkers. Put the two together and you have a winning combination.

Great brands aren’t built overnight. They take time. Just ask McGregor. And not the McGregor you see today, but that of 2008. The ‘Champ Champ’ was still claiming welfare in Dublin in 2013. Today, hardcore fans know him. Casuals always tune in. And those who mistake MMA for a petroleum brand speak his name following the Floyd Mayweather mega melee.

Even with a 4 and 1 record, a confident McGregor predicted, “without a doubt you will see me in the UFC in the future”. Mystic Mac was right. Since then he’s gone from outside contender, to two-weight UFC world champion, movie star to achieving Tom Cruise levels of fame with a reputed $100 million boxing bout against Floyd ‘Money’ Mayweather.

That’s the kind of CV that lands your mug on the cover of Time Magazine… yeah, that happened too. But how? Simple: get the people behind your brand. Speak in a language they understand. Appeal to their wants, needs and desires.

“We’re not here just to take part; we’re here to take over,” a jubilant McGregor professed to raptureless applaud from the native crowd. He was speaking to Dan Hardy after his UFC Fight Night: Dublin” (July 2014) win over Diego Brandao.

McGregor was originally slated to fight Cole Miller. However, Miller pulled out due to an injury, and was replaced by Brandao. His then ‘fight anyone, anywhere, anytime’ attitude only solidified his brand presence. It’s one UFC president, Dana White, often trots out as part of the legacy building campaign.

The Notorious One had become a working class hero – a talisman for Irish folk to aspire towards (and now, with global fame, the rest of the world). With the precision of his left hook, he tapped into the collective conscience of his Irish brethren. Speak in a language they understand and, when it comes time to buy, guess who they’ll choose? That’s right, you! He was ‘over’; a melding of WWE theatrics with legit in-ring skills making for much-watch TV.

And people were watching. In fact, they were buying. The McGregor brand voice had come of age. Crucially, he’d fully won over the UFC brass. With a nation behind you, the UFC would have been remiss not to invest in the McGregor brand.

Media and The Mac Life

It is a rare week when Conor McGregor’s name doesn’t crop up on Chael Sonnen’s You’re Welcome show. Sure, smashing a fan’s phone, punching a guy in a bar and scaling Bellator’s cage were distasteful. In fact, the ongoing accumulation led to brand fatigue on the part of some fans. But the fans were still talking. As Chael will tell you, McGregor generates clicks.

Proactive press coverage wasn’t always the case. Back in February 2013, a visibly excited McGregor made a guest appearance on MMA Fighting’s The MMA Hour. According to the then host Ariel Helwani, fans of the show had been rabble-rousing for his presence. Thousands, rather than millions, were familiar with him. His opening salvo?

Hour long special walk along episodes would follow in the years to come.

Cut to 2017, and Helwani himself would travel to Manchester to present ‘An Experience with Conor McGregor’. The Irish Man had gained a new level of fame. No longer would he come to the media, the media would come to him. He pulled back, controlling his own exposure. It’s a smart move in many ways, pupeerting his own discourse. Did this deter the media from talking about him? Far from it. McGregor’s stock rose. It’s amplified his mystique.

McGregor’s narrowing of the media curtain coincided with the launch of The Mac Life. The publishing platform professes to be “the #1 source for Conor McGregor News, MMA, Sport, Health, Fitness, Fashion and Style”.

In reality, it represents a further expansion his global personal brand. The Mac Life guys have long been part of the McGregor entourage. As has Dee Devlin, listed as the business’s secretary. McGregor is historically loyal to those loyal to him.  Just take John Kavanagh’s SBG Gyms. Even when inter-relations appeared shaky after the Khabib fight, the team has reassembled under a new understanding. The discord led to a new discourse which played out in the Cerrone fight. It’s an admirable quality and one which applies to we marketers.

Marketing, PR and brand building smashes auteurist ideologies. Nothing happens in a vacuum (that’s where the dust gathers). It’s a team effort. So value those close to you. Help them and, in theory, they should help you. Cut the chaff and nurture the wheat. That way everyone’s a winner baby, that’s the truth. 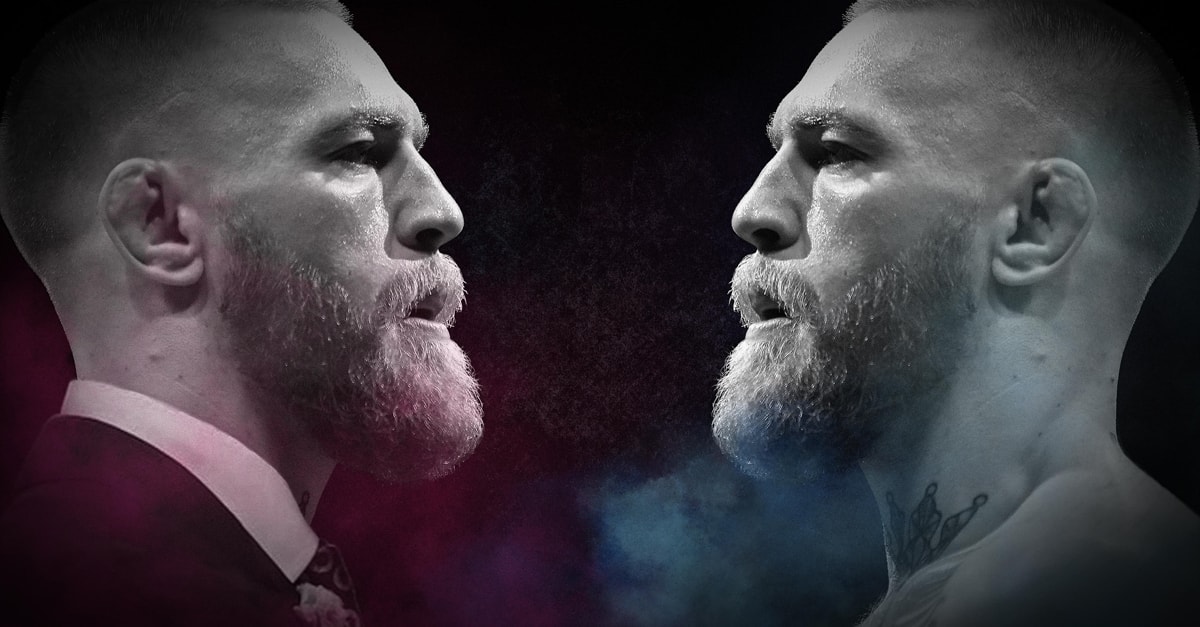 The two faces of Conor McGregor: the businessman and the brawler.

In today’s Brave New World, getting social with followers is the norm for sports stars. And, in doing so, meaningful content remains key. Whether it’s brand building, negotiating, pushing personal causes or product sponsorships, social enables sportspeople to parachute strategic messaging direct into the pockets of people around the world.

The UFC knows this. The organisation is even said to offer social media marketing training courses to members of its roster. But if they want a real lesson, they should follow McGregor. In the words of Montell Jordan, ‘This Is How We Do It’.

A social media study, conducted by Colin Oliver of ORACLE back in 2016, gives weight to this. It found that between August 2015 and Aug 2016, McGregor was mentioned a jaw-dropping 6.4 million times across Twitter, in the news and on MMA-related blogs and forums.

Time travel to today, and McGregor averages 1 million likes per Instagram post. This is no mean feat. The top dog is a social media hot dog. And McGregor continues to build and sustain his fight career on social media. Just ask possible opponents Justin Gaethje, Jorge Masvidal, Nate Diaz, Kamaru Usman – the list goes on and on.

Where McGregor excels though, is harnessing his fight fanship for his own personal greater good. The man is a side hustle magnet, using his social media juggernaut to drive forward endorsements, sponsorships and business ventures.

It goes to show that with clever strategy, not to mention persistence, you can really carve out an alternate career. The key to building a successful brand online amongst other factors is keeping a streamlined message so your audience fully engage with your brand. 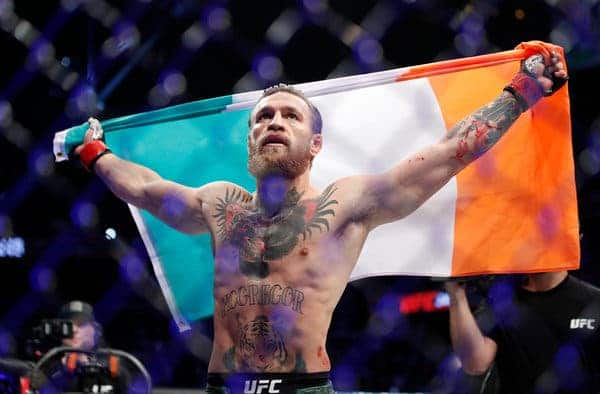 McGregor showing off the tattoos which have become so integral to his brand.

Having over 30 million Instagram followers opens more doors than a hotel doorman. McGregor’s social feed is a window to his perceived status as a fighter, martialist and personality – all his different guises and disguises.

Occasionally he’ll break the fourth wall, offering sincere gestures to other colleagues. Think of his expressions of concern for Max Holloway and delight for Jose’s Aldo’s win over Jeremy Stephens.</spanFor many, he’s an overhyped motormouth. For others, he’s a loveable rogue – an extension of one’s own Id, akin to the visceral pleasures of The Wolf of Wall Street.

One thing’s for sure though: love him or hate him, you know who he is.

The occasional sportsman-like gesture counterbalances questionable actions such as the bus attack. Even here though, McGregor managed to preemptively create PR hype for a fight he knew he’d have to take at some point. Unlike Jon Jones whose out-of-the-cage actions caused sponsors to drop faster than his opponents, McGregor walks a line just fine enough to keep the interest of third party backers. Of course, more unsettling allegations still need answering.

For the UFC and his partners alike, McGregor is a cash cow. On the one hand, the UFC will admonish him, on the other pepper footage of his antics into their marketing.

As such, McGregor has become a social influencer, receiving brand sponsorship from global household names such as fast food giant Burger King, who accompanied him on a private jet in an Instagram post.

Other interests include August McGregor Clothing line and ‘McGregor Fast’, a fitness bootcamp which appeals directly to those who follow him for his physique. Given one of the most popular categories on Instagram is health and fitness, using the platform to develop new business strategies in this way is extremely savvy.

Brands which fail to adapt typically lose in the end. You have to move with the times. You have to stay relevant. McGregor is a master at this, evolving his brand with Darwinian conviction.

Yes, he perpetually craves the spotlight. And, yes, in doing so he flirts with overexposure. Gold watches, flashy cars and recent bad boy antics threaten his status as a hero of his people.

Right now, McGregor appears to be set on turning this around. Just when you think he’s going to go right, he goes left and apologies for being late to the Cerrone press conference.

Where McGregor’s combat sports career goes now remains to be seen. One thing’s for sure though: win or lose, he’s most certainly already won the Mixed Marketing Arts fight.