Internet memes of the ‘90s: thanks for the meme-ories

Searching for internet memes of the 1990s is a form of internet archaeology. We’re digging around in the virtual foundations of the internet, searching through a world that knew nothing of social media or broadband. Down there, in the dark, we encounter the remnants of long-dead cultures like Geocities and Netscape. Like Raiders of the Lost Meme, we’re donning the fedora and the bullwhip and we’re going in…

Memes, but not as we know them

In a world where memes like The Dolly Parton Challenge are born, flourish, die and are forgotten in just 72 hours (yeah, you’d forgotten it, hadn’t you – and it happened in January this year), it’s tricky to track down memes from over 20 years ago.

But, fortunately, we have The Wayback Machine and Know Your Meme in our corner to help with this important work.

Jokes and common cultural references that people share weren’t called ‘memes’ in the 90s. Even though the term ‘internet meme’ was coined by the writer Mike Godwin in Wired magazine in 1993, it didn’t take off straight away – it had to spread. There was no Twitter or Facebook with which you could share the slightest thought that crosses your mind.

Memes – as we now understand them – began to be shared through Usenet newsgroups and by email. It was a slower, less scattershot time. There was less signal to receive and far less of that was noise.

Let’s look at just five of those virtual artefacts from ancient times.

The Dancing Baby meme was born in 1996. It began life as a serious example of 3D modelling and animation by Unreal Pictures and Kinetix/Autodesk, intended as a demonstration of their software. Then they chose to set it to the song Hooked on a Feeling, which somewhat undermined the seriousness of the experiment – but certainly made it catchy!

This 3D animation was then taken by Web Developer, John Woodell and compressed into a gif format, as a demonstration of that new format. This gif, with its endlessly repeating dance,  became one of the first ‘viral videos’, because gifs were videos that were small enough to be shareable through slow dial-up networks.

The dancing baby very quickly found his way onto merchandise and, in 1998, his legendary status was confirmed, when he was written into TV show Ally McBeal as a bizarre hallucination she would see every time she started to worry about her career getting in the way of her desire to have a family. 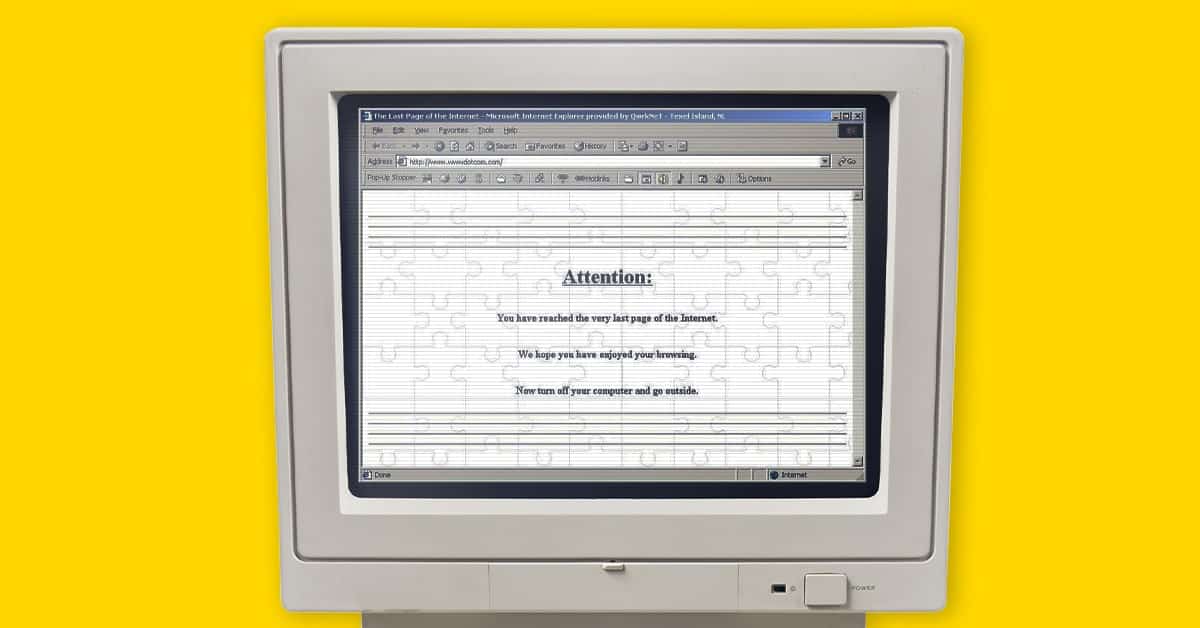 This was one of those ideas that several people had at the same time. Back in the early 90s – a time when colleges were running evening courses to introduce people to the internet – there had been much talk of the infinite nature of cyberspace.

Therefore, by 1997, several people had hit on the idea of parodying that infinity by suggesting that you’d reached the end of it.

As outdated as that notion seems today, it’s an idea that resurfaced in 2018, in a TV ad for the broadband provider, Plusnet in which their ‘Joe’ character finishes the internet and sits and has to read a magazine while he waits for some more internet to be created. Magazines are, of course, what the internet used to look like when it was printed on glossy paper and sold in newsagents.

Babies aren’t the only things that cut a virtual rug on the internet, hamsters do, too. Obviously.

This internet oddity was originally created as a web page of gifs which you had to visit in order to experience it. That page was on Geocities, which means it’s gone the way of the dancing dodo. However, clone pages were created, so you can still see those hamsters throwing shapes.

The Hamsterdance became viral because the URL was used as a form of pranking (what later became known as ‘Rickrolling’) where the link was sent, purporting to be something else and when the unsuspecting recipient opened it – dancing hamsters. 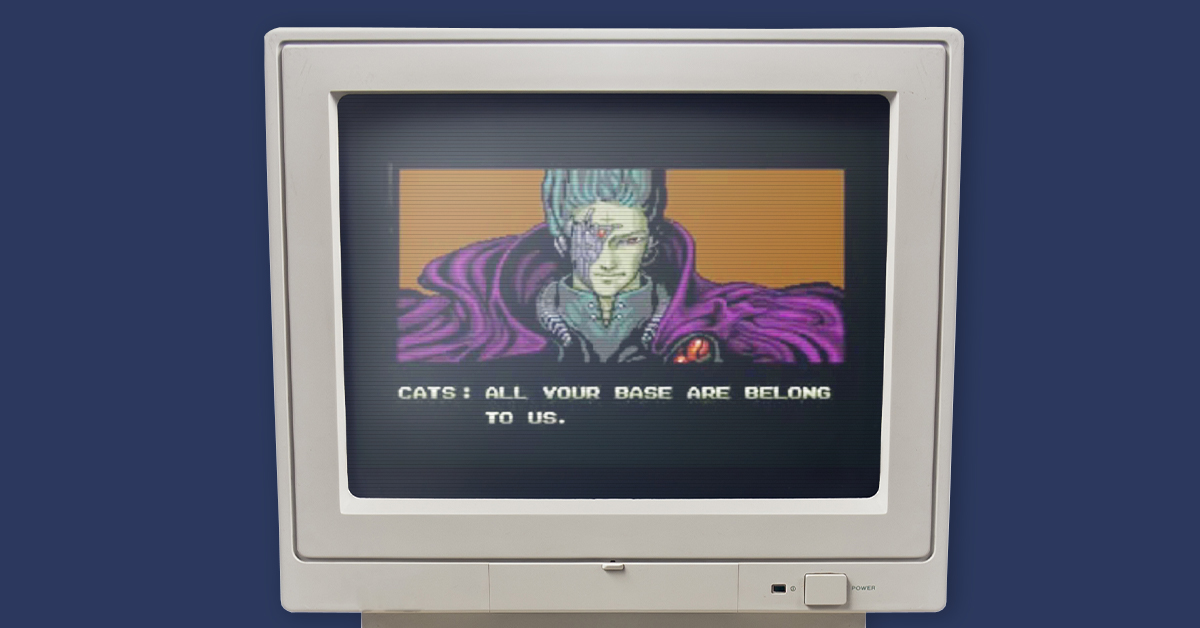 The phrase “All your base are belong to us” was a mistranslation of the line “Cats have taken over all of your bases” from the Japanese video game Zero Wing. There was a lot of poorly-translated Japanese around, in the 90s, as a fan base for Japanese cartoons and Japanese games grew in the west at a far greater rate than the infrastructure to translate them properly. Whilst the imperfect grasp of English tenses and grammar among those translators might be amusing; let us not forget, they were translating one fantastically complex language into another labyrinthine language.

Nevertheless, their errors were amusing and were recognised as part of the charm of Japanese media. “All your base are belong to us” celebrates that.

This meme is also something of a spiritual father to the I Can Has Cheeseburger memes which featured grammatically-challenged cats and began to chase a ball of wool around early social-media in 2007. See, even on the internet, everything comes from somewhere. 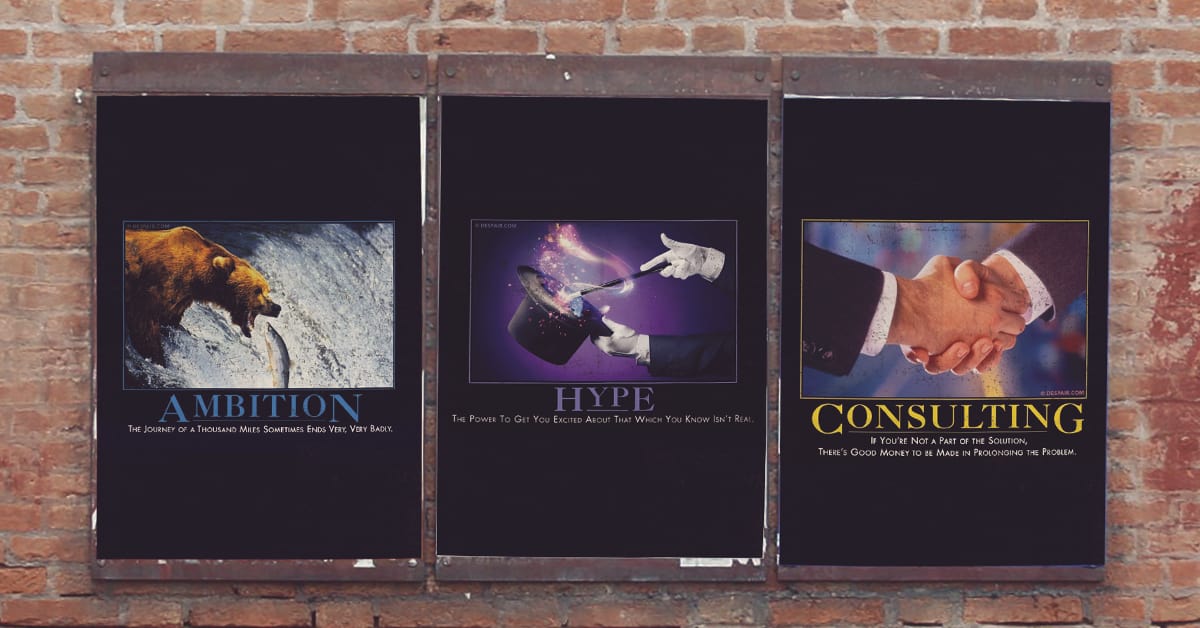 There is a rumour that Americans don’t get sarcasm – which is one of the defining characteristics of British humour. Indeed, YouGov did some research into this very important issue (presumably when they were having a quiet day) and found that as many as 50% of Americans wouldn’t notice when a Brit was insulting them.

But, if you look at American comedians of the 90s, you very quickly realise they do get sarcasm. Chandler, in Friends (1994 to 2004), was very sarcastic; as was the whole cast of Seinfeld (1989-1998). In that spirit, it shouldn’t be surprising to learn that Demotivational Posters are deliberately and exquisitely sarcastic.

As he explains in his TEDTalk, Dr. E.L. Kersten and a few colleagues from a failed business venture decided to turn their disappointment at the failure into something positive, by setting up their own company, parodying the kind of motivational products they saw in the workplace. So, Despair Inc. was born – and those Demotivational Posters can still be bought there, to this day.

The idea was simple – take a stock shot from a photo library and add a bleak and shockingly honest message under it.

The Demotivational Posters were intended as an antidote to the rise of spurious management gurus and motivational speakers who were cluttering-up business meetings with their well-meaning but often counterproductive aphorisms.

As it says on the Despair Inc. website: “the Motivation Industry has been crushing dreams for decades, selling the easy lie of success you can buy. That’s why we decided to differentiate ourselves by crushing dreams with hard truths!”

It’s a dirty job, but someone’s gotta do it.

If you have any vivid memories of those memes that used to travel by email and message board, in the years before social media – and think that we’ve missed some important cultural icons from the late 20th century – let us know.