The 5 Best Social Media Campaigns Ever

It can be quite tricky to pin down the best social media marketing campaigns ever because, by their very nature, social media campaigns are organic lifeforms which are born, thrive, then die – often, in a matter of hours – while other campaigns can evolve over many years.

The term ‘social media’ developed in the 1990s. It’s a baby which has many parents. Was it Darrell Berry and his 1995 academic paper on ‘social media spaces’ which coined the term ‘social media’; or was it Ted Leonsis of AOL, who claims the term was employed by himself and his colleagues in the early when the company was developing AOL Instant Messenger?

No-one is entirely sure who said it but what is undeniable is that social media pre-dates the social media platforms we now apply it to.

Therefore, it stands to reason that the history of social media marketing stretches back beyond the existence of Myspace, Facebook, Twitter and the rest.

The nominees for the best social media campaign are… 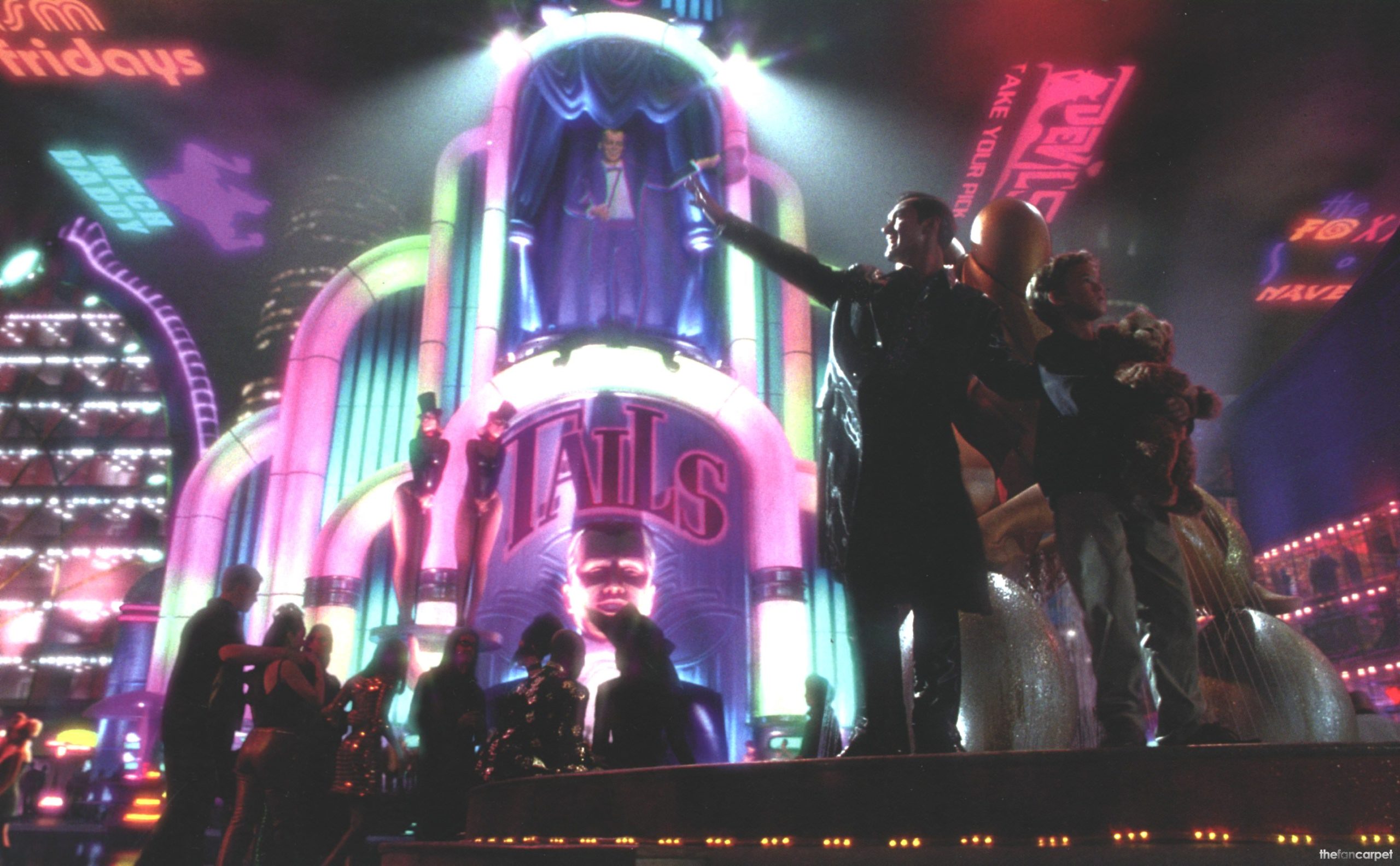 Our first nominee for Best Social Media Campaign is, indeed, from those far-off days when Facebook wasn’t even a glimmer in petulant teenager, Mark Zuckerberg’s mind…

Back in 1999, The Matrix and The Blair Witch Project had demonstrated that the internet could be a powerful and innovative way to market movies. When Steven Spielberg’s movie, A.I. Artificial Intelligence was being promoted, in 2001, they took this to the nth degree.

It all began with the release of the trailer. There was a screen-credit in there for one Jeanine Salla who was credited as ‘Sentient Machine Therapist’. Keen-eyed commentators spotted that and checked online for Ms. Salla’s credentials.

Thus, they were pulling on the first thread of a tightly-woven and exquisitely complex marketing campaign.

The journey they would embark upon would open a window to the future and take them through more than 30 different websites which had been created specifically – none of which promoted the film directly, but each of which worked together to create a fictional universe of the year 2142, where Ms. Salla was hunting for clues to the murder of her partner.

Some of the clues went offline – including hidden messages on the reverse side of the film’s poster, and a hidden phone number which, when called, played a recorded message which led to another website. The clues would lead the curious through various puzzles and blogs to an online game called The Beast.

But, how to ensure that people got the encoded message? Microsoft Games Studio, who had created the online content for the film, ‘leaked’ the first clues to film-fan websites, like Ain’t It Cool News. That sent the virtual ball rolling. Messageboards and website comments sections became hotbeds of people swapping clues and guesses. Fittingly, for a film about learning machines, the marketing campaign went on to have a virtual life of its own. 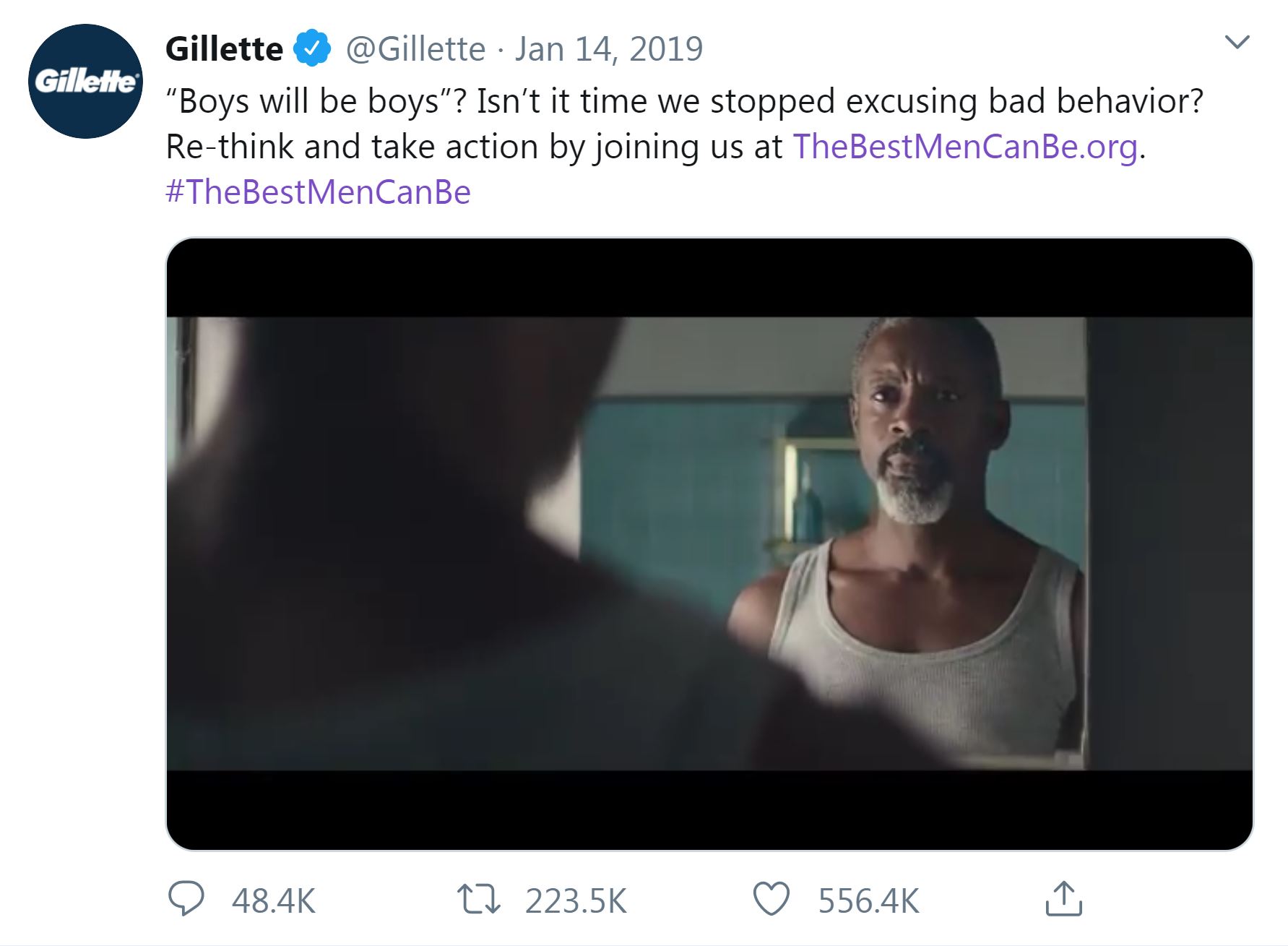 Reacting to the #MeToo movement, that epitomised toxic masculinity, Gillette, decided to take a stand. Gillette understands that its audience is men and that shaving is both literally and figuratively a moment of reflection, so decided it was time to send a message to men, a clarion call about how to avoid toxic masculinity.

Traditionally, their advertising has employed square-jawed masculine stereotypes, with the strap-line: ‘The best a man can get’.  They brilliantly repositioned this by altering it to a challenge, encouraging men to be ‘the best men can be’.

That new take on the razor blade ad certainly cut through. Within hours of launching the ad on Twitter, they had half a million likes and 200,000 shares. They received 1.5 million social media mentions. The month before, they had been mentioned just 10,000 mentions.

The ad has been watched on YouTube 33 million times.

It also created a Twitter-storm of both approval and protest. News outlets covered the story, then they covered the controversy. There was no way of ignoring that advert or missing the message.

This campaign also proved that, by taking a stand on important matters, companies can engage with their customers in a deeper and more meaningful and longer-lasting way. 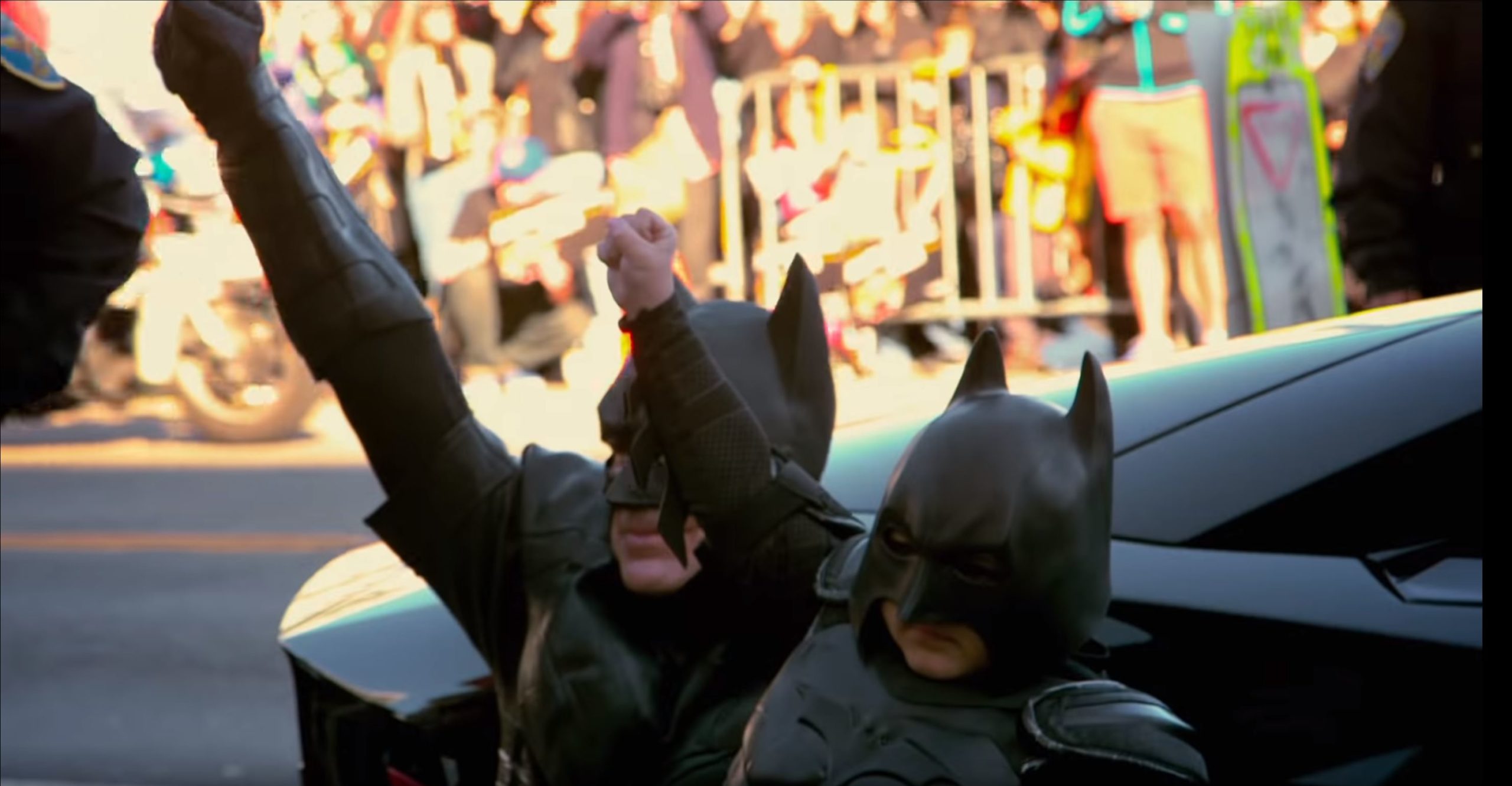 I defy anyone to watch the original Batkid social videos without filling-up. It was a moment when the positive power of community was telegraphed around the world by social media.

This event was orchestrated by the Make A Wish Foundation for five-year-old Miles Scott, who had leukemia and had undergone years of chemotherapy. His wish was very simple: he wanted to be Batman.

The bat-signal was lit up (on social media) from the San Francisco Greater Bay Area chapter of Make A Wish, asking for volunteers. They hoped to get a few hundred willing helpers. They couldn’t have predicted what happened next.

This was a job for BatKid! The local police got involved, as did the local TV network, the local transit authority and the San Francisco Giants baseball team. A luxury car-dealer tricked-out a fleet of black Bat-Lamborghinis.

The event had a cast of costumed characters, including a Batman to take young Batkid on his adventure, as well as a Penguin and a Riddler. They closed roads to traffic and filled the sidewalks with thousands of cheering supporters, many of whom dressed as superheroes for the occasion. The day ended with little Miles being given the key to the city by the actual Mayor, in front of a massive cheering crowd.

The story was covered by press online and on TV, around the world and the #SFBatkid hashtag was circulated and quoted over half a million times, resulting in 1.7 billion impressions.

This much coverage didn’t happen by accident. The campaign was orchestrated by an agency called Clever Girls Collective, who seeded the hashtags and created Twitter accounts to promote the event.

They even secured a message of support from President Barack Obama and, more importantly, actual Batmen, Adam West and Ben Affleck.

But, they weren’t done there. Miles’ story and the coverage of the whole event was soon brought together as a documentary film: Batkid Begins.

Watch this, then tell the world “I’m not crying, you’re crying”.

In case you hadn’t noticed, there is a bit of bad blood between Burger King and McDonalds. Burger King has been far cheekier and more inventive in its advertising – and is constantly baiting its much-bigger rival.

It all began innocently enough in 2015 – when Burger King suggested a joint effort with McDonalds to promote World Peace Day. They suggested both retailers sell the McWhopper – with all proceeds going to the charity Peace One Day.

This may have been a genuine olive-branch between competitors, but McDonalds didn’t see it that way. They refused to play along. The cunning of this ploy was triple-fold – it made Burger King look good, it made McDonalds look bad and it resulted in a 40% increase in awareness of World Peace Day. The campaign also won Burger King a whopping pile of awards

But, this was just the beginning of Burger King’s social media gaming of the golden arches.

There are examples from all around the world, but our favourites include…

In 2017, when the horror movie IT – featuring the demonic clown, Pennywise – was released, Burger King ran ‘Never Trust a Clown’ ads in the cinemas showing the film – allowing the audience to make their own connection with a certain Ronald McD. They then followed this with a Halloween stunt – promising free burgers to anyone who turned up at their flagship London restaurant (in Leicester Square, just across from the cinema showing the film) dressed as a clown.

This was promoted with its own social media ad which was, itself, a pretty scary affair:

Then, in 2018, Burger King relaunched their app with a great stunt. If you allowed the app to know your location – and you drove into a McDonalds carpark – the Burger King app would ping you a promo code that would get you a Whopper from the nearest Burger King for just a penny. This gave people a motivation to download the app, it generated a ton of social media publicity and drew people away from McDonalds – another triple win!

Then, the King’s crowning achievement – their royale wi’ cheese, if you will – came in 2019 when they saw that McDonald’s had lost the trademark to the phrase ‘Big Mac’ in the EU. So, they responded by rebranding their menu to stress that they weren’t selling Big Macs: 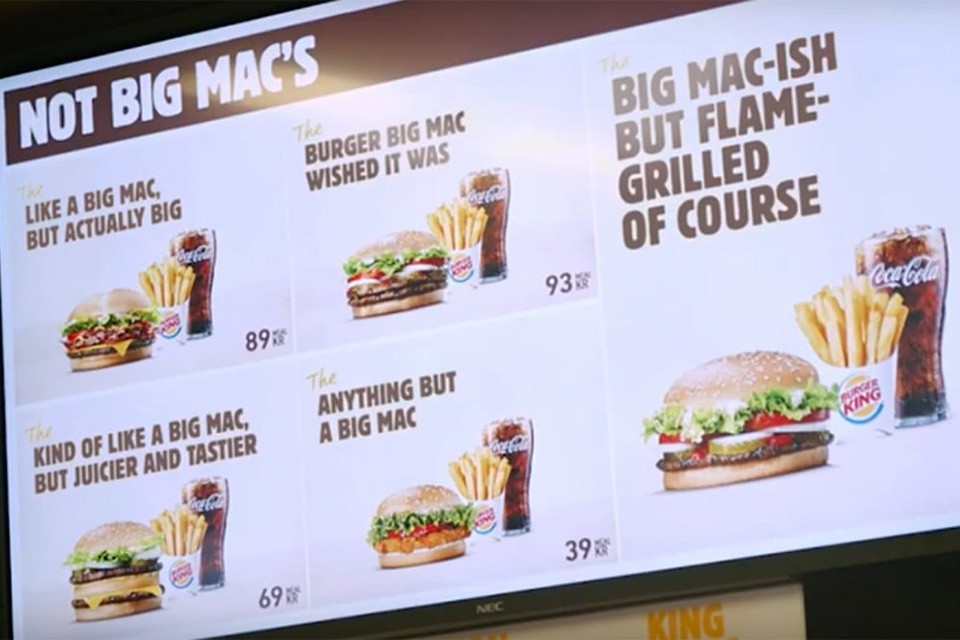 This series of campaigns, ladies and gents, shows how any business can take a problem and turn it into an opportunity – all you need is imagination, a wry sense of humour, and a client who is willing to take a few risks.

If you want to know how to weaponise social media and build a career out of it; two words: Ryan Reynolds. The man is a social media Jedi and a one-man meme machine to boot.

And this all of this came about because of the film Deadpool.

It’s fair to say that, by 2016, Reynolds’ career was not at its zenith. As well as guesting in the indifferent comic-book movies X-Men Origins and Blade Trinity, he’d starred in the disastrous comic-book movies Green Lantern and RIPD and provided voices for animated films The Croods and Turbo. He was well into his 30s now and it was becoming ever-more apparent that he’d missed his chance to become a big star. So, everything was riding on Deadpool – therefore, he put maximum effort into the marketing.

That work began almost a year before the film’s release – with this video which immediately set the tone.

When the decision was made to release the film on Valentine’s Day, they decided that they should try to turn every public holiday into a Deadpool Day. There was a Halloween video of Deadpool recruiting young heroes (an idea which would later reappear in the Deadpool 2 film) only, in this case, they were children in Halloween X-Men costumes. “How many of you have taken a human life?” he asks the nonplussed kids.

By the time Christmas arrived (less than two months before the film’s release) a fully integrated social media campaign was orchestrated; The 12 Days of Deadpool.

Needless to add, Deadpool was a smash hit – the highest grossing R rated film ever (and Reynolds’ reaction when Joker recently beat that record is worth looking for on his Instagram feed).

Reynolds (who is, let’s be honest, indistinguishable from the character of Deadpool, now) has cannily pushed social media marketing to the next level, by hiding adverts within adverts. Here he is, in an early promo for his summer 2020 movie, FreeGuy:

And this is Ryan Reynolds’ masterpiece – a buy-one-get-three-free concept of an advert, inside an advert, contained in an advert, wrapped in an advert. Watch and be struck dumb by the layers of marketing know-how that went into this extraordinary spot.

This is a masterclass in understanding your audience, trusting their intelligence and playing to the strengths of your brand. Truly, Mr. Reynolds, we are not worthy.

Four adverts? Yup. There are four products for sale in this ad – There’s the film itself, there’s the streaming service it’s on, there’s the TV he’s watching it on and, finally, there’s the gin company he owns. All of which adds up to one masterful advert for Ryan Reynolds’ brand.

So, what do you think? Have we missed off some obvious contenders?

Hit us up on Facebook or Twitter and link us in to the social media marketing campaign which you feel pushes the form and is a lesson for us all. We’re eager to learn and to share.